Winning the fight against the Kiev Junta could change the entire World!

NovoRossiya can virtually halt US hegemony & US sponsored regime change and may hasten the end of the dollar.  Putin’s hands are tied & cannot intervene on threat of World War 3 from US & NATO.  Humanitarianism is hollow drum beaten to death by the US & majorly UK & France since many years with the tacit support & compliance of Germany.

Think if the US created GAZA (IDF kidnapped & executed the 3 teenagers not Hamas – See http://rt.com/news/177716-us-israel-funding-aggression/) & shot down via Kiev proxies MH17 as diversions to take public attention away from a campaign in tatters and now the EU passes bills in secret to send military aid to Poroshenko!  How important do you think it is for the US to win this war?

Do you think for one second that true Maidan protesters wanted another oligarch thief for a president?  This is simply a US puppet put in place to do US bidding.

This war did not start openly in 2014 with the conventional attack by the Kiev Junta upon the people of South East Ukraine.  It began with 9/11 and from this event & the recent downing of the MH17 airliner we can draw a glaring comparison to see openly what a real plane crash actually looks like with photos of dead bodies & lots & lots of plane wreckage with fuselage & wing parts and jet engines. YET look at the image below of the Pentagon crash site where the wreckage was concentrated to a single point on the Pentagon wall ?

Stranger still is the 9/11 crash at Shanksville with no bodies or wreckage to compare to MH17!

What Edward Snowden has taught us is that the most plausible conspiracy theories are indeed facts waiting for independent corroboration! 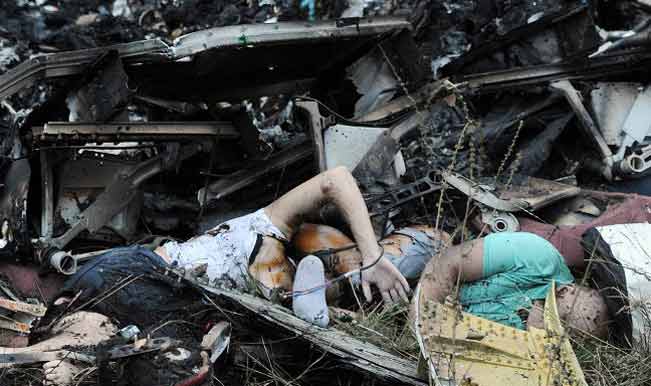 If the US faked the Pentagon crash then its sure & certain that they faked the Twin Towers & Building 7 that was not even touched and Shanksville with no bodies or debris!

Holes in region of cockpit patterned consistent with Air to Air artillery most likely from Sukhoi 25 of Ukrainian Air Force & not BUK as stated by NATO & US.

My personal guess is that a Kiev Air Force pilot mistook the MH17 plane for Putin’s plane which looks almost identical with almost the same markings & he fired!

Putin’s plane was in the same area just a few Kms on the Russian side of the border just 40 minutes before the dowing of MH17 coming back from Brazil & the pilots were told to be on watch for it?

Click on link below to see exposed for the World to see MH17.

And some narrative on the subject!

We have established by 9/11 who the US is!  Now can anyone judging the situation take seriously that the US did not have a hand in downing MH17?

The grounds were laid in 9/11 to free the American electorates conscience for extreme brutality across the globe in search of revenge & prevention of future attack with spending of obscene amounts of money for defence contractors for the benefit of a tiny few.   Research how many non-combatant Americans are killed each year by terrorists & take away all regions where the US created violent foment – do the single figures justify a $100 billion war machine?

Bear in mind the words of Noam Chomsky!

The US has made it its business to control via the Trojan Horse of patriotism the limitations of acceptable US opinion on fear of lynching to hold an alternate point of view.

Never forget – US & EU are only 10% of the World’s population & this population in majority have really no idea what their leaders are up to !

Today NOBODY must believe anything in any media or follow blindly as the Internet is here to allow in-depth research by everyone on the planet with access to a computer & ability to use the brain that God gave them to see past presented opinions to discover your own.

3 thoughts on “NovoRossiya – “For Evil To Triumph It Only Takes Good Men To Do Nothing !””